Back to South Sefton

In response to coronavirus, this service has made some changes - for updated service information click here.

We support people living with Autism Spectrum Conditions from our base at Hartley Hospital in Southport. We aim to provide specialist support for those who may have previously ‘fallen through the gaps’ by not being regarded as having a mental health problem or a learning disability.

The team has clinical specialists with backgrounds in nursing, clinical psychology, social work and occupational therapy.

We use creative interventions which help with the social and communication difficulties faced by people with Autism Spectrum Conditions, their families and care teams.

We work with other services such as social care and local colleges to help support service users.

Anyone aged 18 years and over may self-refer or be referred by another person for example a family member; GP or other mental health professional.  You can make a referral by completing the referral form and either posting or emailing it to the service, via referralsseftonaspergerteam@merseycare.nhs.uk.

The Liverpool and Sefton Asperger's teams offer an 8 week post diagnostic support group to people after a diagnosis.

Autism Spectrum Condition (ASC) is a lifelong disability that affects how a person makes sense of the world, processes information and relates to other people. Autism is often described as a ‘spectrum disorder’ because the condition affects people in many ways and to varying degrees.

The linear version of the spectrum is not a very good representation of how autism is experienced by an individual. It doesn’t give any indication of what someone might struggle with and can lead some to assume that people “aren’t that autistic” which can lead to that person becoming more easily overwhelmed. Instead, the circle below shows some of the differed areas autism affects. Everyone will have a different level of difficulty in each area. 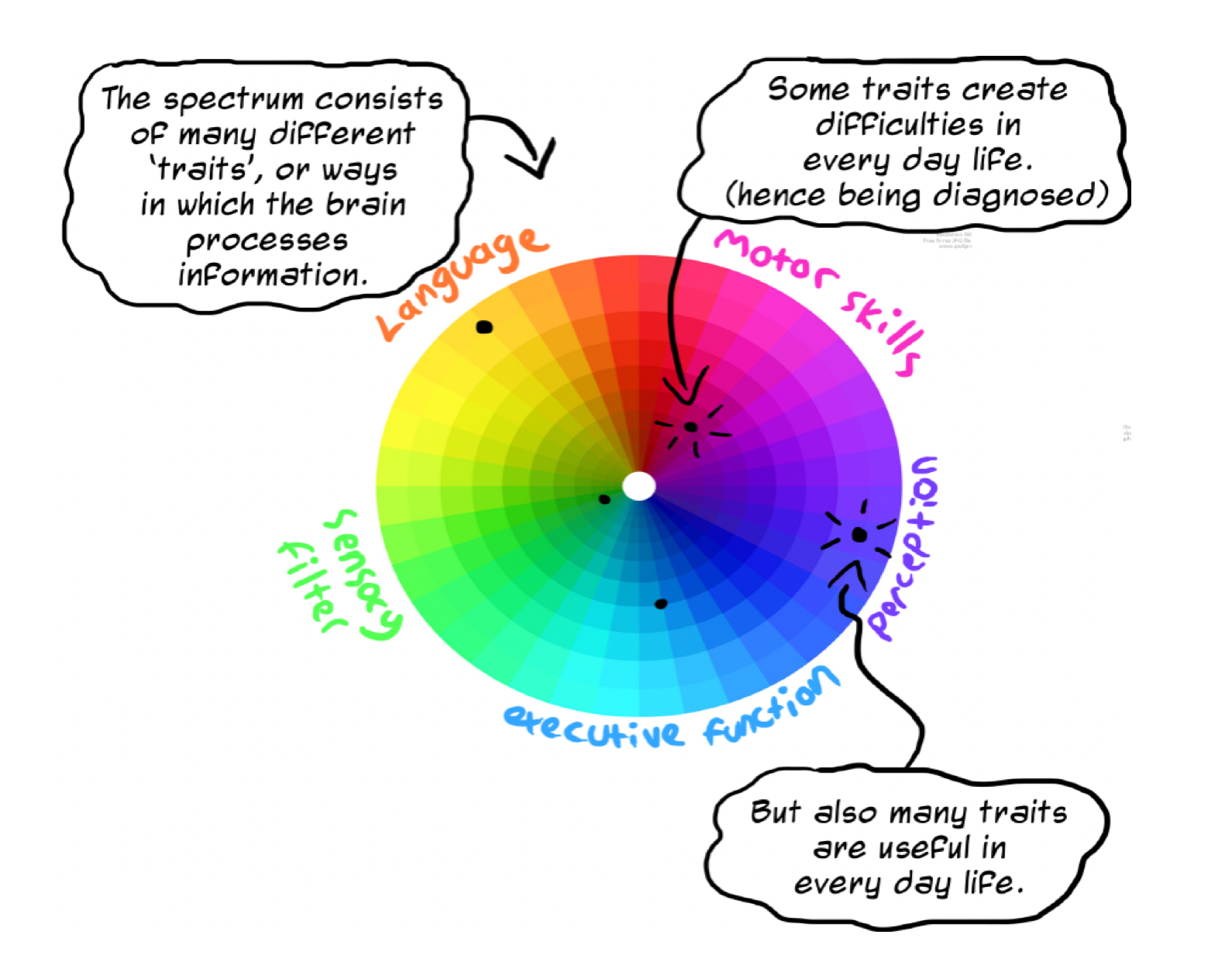 ASC is mostly a ‘hidden disability’. This means that you can’t tell that someone has the condition from their outward appearance. However, with the right support and encouragement, people with ASC can lead full and independent lives. This is another benefit of viewing the autistic spectrum as a circle of different areas rather than a line ranging from very autistic to not autistic.

People with the condition have difficulties in two main areas that are often referred to as the “dyad of impairments”. They are described below.

People with ASC sometimes find it difficult to express themselves emotionally and socially. For example, they may:

Many people with ASC want to be sociable but have difficulty with initiating and sustaining social relationships, which can make them very anxious. People with the condition may:

Restrictive and repetitive behaviours and interests

People with ASC may also have one or more of the following traits:

Who is affected by ASC?

It is conservatively estimated that one person in 66 is on the autistic spectrum. People with Asperger’s come from all nationalities, cultures, social backgrounds and religions.

The exact cause of ASC is still being investigated. However, research suggests that a combination of factors – genetic and environmental – may account for changes in brain development. Asperger’s is not caused by a person’s upbringing, their social circumstances and is not the fault of the individual with the condition or their parents.

Is there treatment available?

Autism is not a disease or illness so there is no “cure” for autism. However, there is help available to better understand what being diagnosed with the condition means, how to manage the difficulties associated with the condition, and how to access other support services, such as support workers and benefits if necessary.

Mersey Care’s Asperger team also believes that autism isn’t negative. There are several strengths and desirable characteristics associated with autism, such as a better ability to focus for long periods of time, punctuality, honesty and attention to detail.

We also believe that anyone diagnosed with ASC does not need to be “fixed”, rather supported to manage difficulties better to improve their quality of life. Everyone with ASC is a unique individual and should not feel as though they must change who they are to fit in with others.

Asperger’s Syndrome is a type of autism, also sometimes referred to as “high functioning autism”. Asperger’s Syndrome is no longer used as a diagnosis, instead, a diagnosis of Autistic Spectrum Disorder (ASD) is given. If you have already been diagnosed with Asperger’s, your diagnosis will not change to ASD, but you can use the term if you prefer. Our team prefer to use the term ASC rather than ASD, because we believe “disorder” to portray the diagnosis in a more negative way.

Though ASC certainly brings challenges, as mentioned in the previous section, there are also strengths associated with the condition.

Pros and cons of diagnosis

For more information and support, come along to our monthly Asperger Collective meeting and meet other families in similar situations.

Guides for professionals and carers

Supporting an autistic individual who is experiencing anxiety

A guide to reasonable adjustments for:

Community nurse: A qualified registered nurse who works in a community based team. They have specialist knowledge in physical health and formal training in ASC. They are also experienced in promoting positive mental wellbeing and working on developing self-help strategies for people struggling with common mental health difficulties, such as mild-moderate anxiety and depression.

Clinical specialists: A qualified social worker who now works in a clinical setting. They are experienced in diagnostic assessment, care planning, and review. They also help deliver our: Understanding ASC post-diagnostic support, in both group and one to one format.

Trainees/students: A trainee or student is someone training to be a clinical psychologist, nurse, social worker, or occupational therapist. Occasionally, the ASC team supports them with gaining experience towards their qualification. They work under the supervision of a member of the ASC qualified in their profession.

The Girl with the Curly Hair: https://thegirlwiththecurlyhair.co.uk/

Mersey Care have self help guides for many common mental health issues:

Learn mindfulness and meditation with the Headspace app: Meditation and Sleep Made Simple - Headspace

The Asperger service can only accept referrals for adults aged 18 or over.

Before a referral is made by a GP, the person being referred must have consented to the referral. This must be clearly indicated on the referral form to avoid delays, or the referral being rejected.

You can make a referral by completing the referral form and either posting or emailing it to the service, via Referralsseftonaspergerteam@merseycare.nhs.uk.

The Asperger Service offers diagnostic assessment and brief interventions. The team does not offer ongoing support and monitoring.

The team also does not have psychiatry attached, so is unable to handle any medication queries or management, nor can we care coordinate. People who require these services can remain open to other teams, such as CMHT, whilst being open to the Asperger service.

If you are looking to refer a child or young person for an ASC assessment, please visit Autism Spectrum Disorder (ASD) :: Alder Hey Children's Hospital Trust.

The drop in is a ‘collective’ of service users, carers and professionals who provide a service to help and support people with Asperger's Syndrome. It provides a warm and welcoming space for service users and carers to access services, participate in activities of interest, and find out more about what’s available in the community.

The drop in is at 1.30pm to 4.00pm on the last Friday in the month at the Quaker Meeting House, 22 School Lane, Liverpool, L1 2BE (at the back of Primark). For additional information, read here.